Félix Vallotton was born on December 28, 1865, in Lausanne, Switzerland, into a well-to-do middle-class family. At the age of seventeen, he came to Paris to enter the Académie Julian. He began his artistic career by painting portraits, one of which was exhibited at the 1885 semi-official Salon des Artistes Français, and then turned to interior scenes. It was during this period that Vallotton developed his own manner of painting: he worked with small, precise strokes, carefully rendering every detail and creating a smooth canvas surface. This is precisely why he is regarded as one of the precursors of the so-called Neue Sachlichkeit ("new objectivity") movement, which originated in the 1920s. Vallotton first tried his hand at etching in 1897 and subsequently produced a large number of wood engravings, quickly winning renown as a graphic artist. He contributed to many magazines, including the Revue Blanche, Le Rire and L'Assiette au Beurre, and designed posters. In 1893 Vallotton broke away from the Société des Artistes Français and exhibited his picture Bathing on a Summer Evening at the Salon des Indépendants, where it was unanimously attacked by conservative critics. He also sent his works to the first Gallery of the Art Nouveau. By this time Vallotton had joined up with the Nabis and participated in their exhibitions. In 1900 he was granted French citizenship and thanks to his marriage, in 1899, to a girl from the Bernheim family became a man of means. He constantly exhibited at the Bernheim-Jeune Gallery together with Bonnard, Vuillard and Rouseel, and was among the organizers of the Salon d'Automne. He displayed his works at the exhibitions of the Vienna Sezession group, published his articles in the Munich magazine Jugend and the English magazine Chap-Book, but it was only in 1910 that he was introduced to the public in Switzerland. In 1913 Vallotton visited Russia on the invitation of the collector G. Haasen whose portrait he completed in St. Petersburg. During the First World War the artist produced an anti-war series of drawings and painted his famous picture Verdun. In the 1920s he regularly exhibited at the Salon d'Automne, though his popularity underwent a marked decline. The artist died in Paris December 29, 1925. Apart from his work in the fields of painting, drawing and sculpture, Vallotton wrote three novels and a number of plays. His illustrated autobiographical novel La Vie Meurtrière (The Deadly Life) was published in 1930. 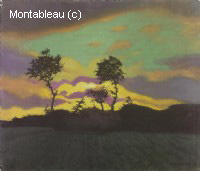 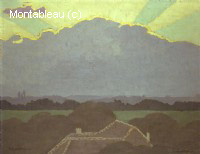 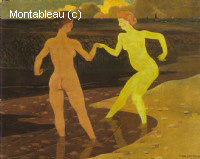 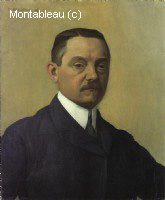