"Vincent van Gogh was born near Brabant, the son of a minister. In 1869, he got a position at the art dealers, Goupil and Co. in The Hague, through his uncle, and worked with them until he was dismissed from the London office in 1873. He worked as a schoolmaster in England (1876), before training for the ministry at Amsterdam University (1877). After he failed to get a post in the Church, he went to live as an independent missionary among the Borinage miners. "He was largely self-taught as an artist, although he received help from his cousin, Mauve. His first works were heavily painted, mud-colored and clumsy attempts to represent the life of the poor (e.g. Potato-Eaters, 1885, Amsterdam), influenced by one of his artistic heroes, Millet. He moved to Paris in 1886, living with his devoted brother, Theo, who as a dealer introduced him to artists like Gauguin, Pissarro, Seurat and Toulouse-Lautrec. In Paris, he discovered color as well as the divisionist ideas which helped to create the distinctive dashed brushstrokes of his later work (e.g. Pere Tanguy, 1887, Paris). He moved to Arles, in the south of France, in 1888, hoping to establish an artists' colony there, and was immediately struck by the hot reds and yellows of the Mediterranean, which he increasingly used symbolically to represent his own moods (e.g. Sunflowers, 1888, London, National Gallery). He was joined briefly by Gauguin in October 1888, and managed in some works to combine his own ideas with the latter's Synthetism (e.g. The Sower, 1888, Amsterdam), but the visit was not a success. A final argument led to the infamous episode in which Van Gogh mutilated his ear. "In 1889, he became a voluntary patient at the St. Remy asylum, where he continued to paint, often making copies of artists he admired. His palette softened to mauves and pinks, but his brushwork was increasingly agitated, the dashes constructed into swirling, twisted shapes, often seen as symbolic of his mental state (e.g. Ravine, 1889, Otterlo). He moved to Auvers, to be closer to Theo in 1890 - his last 70 days spent in a hectic program of painting. He died, having sold only one work, following a botched suicide attempt. His life is detailed in a series of letters to his brother (published 1959)." - From "The Bulfinch Guide to Art History" 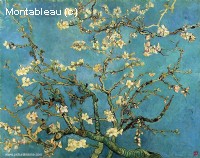 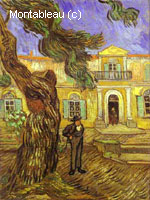 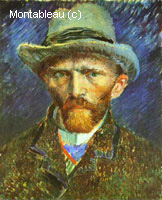 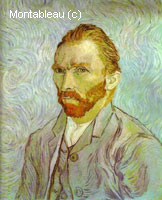 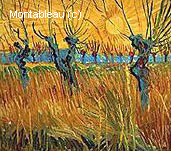