"There is only one master here - Corot. We are nothing compared to him, nothing." Claude Monet, 1897 "He is still the strongest, he anticipated everything..." Edgar Degas, 1883 Introduction [to the 1996 catalog of the exhibition "Corot"] Today it is rather surprising to read the unqualified praise for Corot voiced over and over again by the generation of painters who were maturing just when he died. It seems peculiar that these artists so greatly esteemed le père Corot, since Corot pretended to be out of touch with artistic developments at the end of his life and disapproved of the confrontational nature of the work produced by Monet and the other Intransigeants seeking to commandeer the walls of the annual Paris Salon. The very notion of modernity that infuses much of Monet's art, the knowing urbanity of Degas's, the ceaseless experimentation that characterizes both these oeuvres seem completely at odds with Corot's contemplative vision of a timeless, unchanging Arcadia - or what some call his monotonous views of Ville-d'Avray. Reading further, one learns that in the late 1920s and early 1930s both the painter Jacques Emile Blanche and the historian Alfred Barr, founder of New York's Museum of Modern Art, believed that Corot's impact on twentieth-century art would rival Cezanne's. These views are so far from the present day conception of Corot's importance to the history of painting that a thorough reappraisal of his art is clearly long overdue. Since the 1930s historians have attempted to establish Corot as the precursor of Impressionism, the inventor of sunlit landscapes untroubled by anecdote or meaningful incident. Struck by his marvelous studies painted in the open air in Italy, the writers Germain Bazin and Kenneth Clark saw Corot as the perfectly optical painter with a perfectly innocent eye - in short, the unthinking man's painter - so long as he was only sketching from nature. Comparing the on-the-spot study of the bridge at Narni with the finished Salon painting of the same view, Bazin called the former "a marvel of spontaneity in which there is already the germ of Impressionism, [while] the Salon picture, even though it is painted in beautiful thick paint and with great delicacy, is nonetheless a rather artificial Neoclassical composition." In Clark's opinion, the same study "is as free as the most vigorous Constable; the finished picture in Ottawa is tamer than the tamest imitation of Claude." Since the 1980s, when Peter Galassi directed attention to the outdoor painting of Corot's near contemporaries Michallon, Bertin, Granet, and Caruelle d'Aligny, art historians have linked Corot to the generation of painters who preceded him as opposed to those who followed him. As those and other painters in Corot's Italian circle became better known, Corot was more and more seen as the obedient disciple of Pierre-Henri Valenciennes, the codifier of Neoclassical landscape painting; as the last in a line of painters continuing to work an aesthetic forged in the eighteenth century. Yet while both views contain much truth, neither characterization of Corot - as the last Neoclassicist or as the first Impressionist - is sufficient to encompass the totality of his achievement. For example, neither explanation satisfactorily accommodates the extraordinary history paintings, among them Hagar in the Wilderness, Diana Surprised in Her Bath, Democritus and the Abderites, Homer and the Shepherds, that actually made Corot's reputation in the 1840s: the kind of painting that prompted Baudelaire to write, "at the head of the modern school of landscape stands M. Corot." These are the works that continue to disturb modern critics. Nor does either theory adequately account for Corot as a painter of figures. When pressed by an interlocutor, Degas proclaimed Corot an even greater figure painter than a landscapist. It was largely the figure paintings that Degas recommended to his collector friends, such as Henri Rouart, who owned Lady in Blue. Degas's colleague Mary Cassatt actively counseled American collectors the Havermeyers, the Palmers, Colonel Payne, and others to buy figure paintings rather than landscapes. It was Corot the figure painter who impressed Van Gogh, Gauguin, and Cezanne; as Edward Lucie-Smith has observed, paintings such as Corot's Dance of the Nymphs may be the key to Cezanne's late paintings of bathers. In the 1910s, Juan Gris and Picasso copied figures by Corot. The exhibition of his figure paintings organized at Paul Rosenberg & Cie. in 1928 profoundly affected the work of Andre Derain and Andre Lhote, and it prompted Blanche and Barr to reevaluate Corot's impact on the art of the present century. Yet today Corot continues to elude art historians and critics, which is why we believed it important to mount a retrospective in which every aspect of his painted oeuvre would be fully represented. A different kind of exhibition might have shown Corot only at his most ravishing, but it would be deceptive: a fundamental aspect of Corot's work is that his drawing is sometimes awkward, his compositions sometimes formulaic. An exhibition tightly focused by theme or period might have shown Corot as a more coherent and consistent artist than he appears here; but his oeuvre does in fact reflect the seemingly contradictory tenets of Neoclassicism, Romanticism, Realism, and Naturalism. Nonetheless, artists from Delacroix to Courbet to Renoir to Picasso, who knew Corot's work well, stubbornly held it in the highest possible regard. We hope that this exhibition will enable a new generation of viewers to know Corot's art well and to discover for themselves all that his paintings have to offer. - From the introduction to "Corot"

Luzancy, the Path through the Woods

Mantes - the Cathedral and the City Seen throuth the Trees 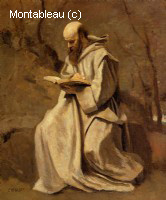 Narni - The Ponte Augusto over the Nera 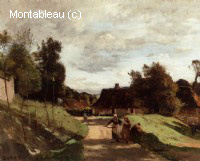 Near the Mill, Chierry, Aisne